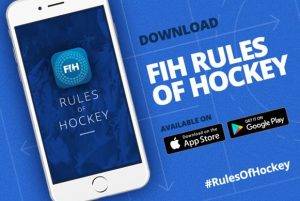 The app details the official FIH Rules of Hockey 2017, providing officials, players and fans with an easy-to-use and accessible resource.

Mobanode, who have created similar products for other sports including rugby and cricket, were commissioned to develop the app for hockey. The objective was to create a tool that not only helps officials but also gives athletes and fans a better understanding of the game.

The app, which will be constantly updated to reflect approved Rule and Regulations amendments, also includes helpful quizzes to help users learn about the rules that govern the game of hockey. It has been launched with a view to replace printed Rule books previously distributed from FIH’s headquarters in Lausanne.

Speaking of this launch, FIH CEO Jason McCracken said: “This app was developed with two key questions in mind: how can we reach a much wider audience with what we know is an incredibly important development tool? And how can we produce such information in a more sustainable format? With smartphone ownership increasing across the world, we believe this will be an extremely useful and engaging educational resource for everyone involved in our sport, particularly younger generations who are key to our future.”

He continued: “This tool is yet another important component of our 10-year hockey Revolution strategy aimed at making hockey a global game that inspires the next generation. In particular, this app will be key to helping us achieve our aim of increasing professionalism across the sport by increasing awareness and understanding of the rules that govern it.”

Well done to the Hawks winning their game today.

Another beautiful night for practice.

Sad we couldn’t have our camp this year. It woul

Hopefully we’ll be back to hockey soon.

Today is International Women’s Day and we celebr

Well done to all our junior hockey stars! It's bee

Christmas has come to the field! Hope everyone has